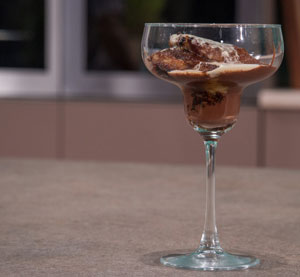 For the crème anglaise:
Pour the milk together with the heavy cream into a saucepan; add the cinnamon sticks and bring to a boil. Remove from the heat, cover and leave aside for at least half an hour so that the cinnamon sticks release their aroma. Then beat the egg yolks with the sugar in a bowl, until fluffy and light-coloured. Gradually add the warm milk mixture into the yolks and sugar, stirring constantly. Transfer the mixture back to the saucepan, simmer over medium heat until the cream thickens, removing the cinnamon sticks. To ensure that the cream is ready, check for consistency: the texture should be thick enough that the mixture coats the back of a spoon and holds its structure when you swipe your fingertip across it.

For the bananas:
Slice the bananas in half and lengthwise and sprinkle with the flour.
In a bowl add the brown sugar, semolina, cinnamon, cocoa and salt and mix well.
In another bowl, beat slightly the egg white with a spoonful of water until well dissolved.
Dip the floured bananas first in the egg white, then in the brown sugar mixture. Then sauté both sides by flipping them in a buttered non-stick frying pan until they are caramelized and have acquired a golden crust.